From: David Hickson – Campaigner for the NHS When choosing the Twitter user-name “NHSPatient” I did not realise how important this might become. 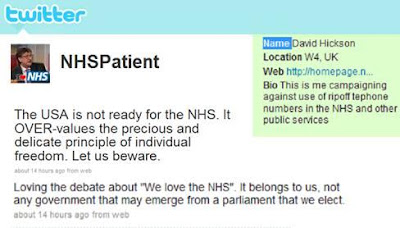 We love the NHS because of the unique principles that distinguish it from any other healthcare system. The key principle is “free at the point of need”, being funded (almost exclusively) through progressive taxation.
We can argue over whether treatment and care meets or exceeds necessary and desirable standards, but that is a characteristic of how it is managed from time to time, not of the nature of the service.
The present government has long delayed its response to an unnecessary consultation on a necessary ban on use of revenue sharing telephone numbers. Even now, there are severe concerns that the ban may not be complete.
Whilst representatives of a potential future government have sought to present themselves as ready to fund it, one must question whether the possibility of allowing funding to be obtained from patients by stealth will be too attractive to resist. That is what the present government has done and it is only coming around to (perhaps) correcting its mistake over four years later.
Those who argue that one should have the freedom to use one’s financial resources to secure better service within the NHS, and that this is a valid way of funding improved services, are arguing against its very principles.

(For a full catalogue of radio and other sound items, visit Radio / Sound Player)

Links to sound clips in blog postings will appear with a play/pause button alongside them in the text.
Click on the button to hear the item.

The player controls will appear at the bottom left corner of the screen.
Explore the options and features.

• All comments are subject to moderation

• Anonymous comments are unlikely to be published